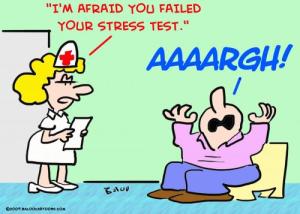 We all know this from personal experience: some people are good at handling stress and others…well, they’re simply not. Present any two individuals with the same stressful situation and chances are they will respond differently. Of course no one is immune to the adverse effects of stress, but it’s true that some individuals are, on the whole, particularly susceptible to the adverse effects of stress, while others are, on the whole, resilient. It’s no wonder then, that neuroscientists are asking: What molecular changes in the brain play a role in mediating stress susceptibility or resiliency?

During the last couple of days at SfN, I had the opportunity to speak with Michael Lehmann [Poster RR13], a postdoc in the at the National Institute of Mental Health (NIMH), who asked that very question. In particular, Michael wanted to know whether environmental enrichment could buffer the adverse effects of stress (thereby mediating stress resiliency)  and if so, he wanted to know what brain regions were involved. 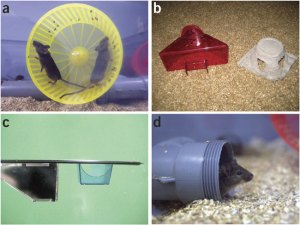 His studies were done in c57bl/6 mice and the environmental enrichment (EE) setup included: hoops and running wheels of multiple colors and textures as well as various types of nesting material. Animals in the control group were provided with standard bedding and nestlet material. Both groups had continual and unlimited access food and water. After 4-6 weeks in their respective homecages (EE & regular), half of the mice from either group were subjected to social defeat stress over a period of two weeks, while the other half were simply left alone for two weeks. In total, then, there were four groups:

Following the two weeks of stress exposure, animals were put through a behavioral battery of tests to measure anxiety levels, risk-taking behavior, social interaction and depressive- like behaviors. The results?

There were no behavioral differences in any of these tests between the non-stressed animals (Groups 1b and 2b). In other words, the environmental enrichment alone was not sufficient to reveal any differences between the animals. Differences were apparent, however, between the groups who were subjected to stress (Groups 1a and 2a). The animals who were in the non-enriched environments displayed higher levels of anxiety and depressive-like behaviors in tests than did the environmentally-enriched (EE) group. In a series of follow-up experiments, Michael then looked at what brain regions differed in activation between these two groups (using the functional neuroanatomical marker  Delta FosB) and found that EE mice (resilient to the effects of stress) mediated their responses via brain regions known to be associated with emotion and fear regulation.

To further investigate the role of the infralimbic cortex (IC) in particular, Michael ran one last series of experiments. He lesioned the IC using idotenic acid (a substance with selectively destroys neurons) both before and after EE to determine whether or not the IC was necessary for the EE-mediated stress resiliency.

Animals who received the lesion prior to EE, demonstrated changes in behavioral tests. They showed decreased levels of Delta FosB expression in the nucleus accumbens (NA) and the . That is to say, when the IC was lesion prior to EE-induction, the beneficial effects of EE-mediated stress resiliency virtually disappeared. On the other hand, animals who received the lesion after EE-induction, demonstrated no changes in behavior and no decreases in delta FosB expression.

What does it all mean?

Well, for one thing it certainly reinforces the idea that environmental enrichment has positive outcomes for the brain. Furthermore, the last two portions of Michael’s experiments demonstrate something entirely novel: the acquisition of stress resiliency and the expression of stress resiliency operate via two different pathways. In Michael’s own words: “After environmental enrichment if you lesion [the IC] it’s okay, because the expression of the resiliency is now residing in other brain regions – possibly in the accumbens, possibly in the intercalate cell islands of the amygdala…”

So, the “where” is to be determined. I’m sure there will be follow-up experiments, and when there are – I’ll be sure to update. Anyways, this officially concludes my official “SfN reporting”. This blog, though, isn’t going anywhere – so please do keep the feedback (the good and the bad) coming!

P.S. Photo Credit in “The Setup” section comes from this paper.